HELP! I AM A MIDDLE SCHOOL ATHLETICS DIRECTOR!

What did I get myself into? That is what many of us ask ourselves when our Principal comes up to us and asks us to be the Athletic Director. “How hard can it be?” is a question that runs through our minds before we quickly say yes. Most middle school AD’s are simply coaches that are willing to add this extra responsibility to their already busy schedules or who might say yes to get a coaching or Physical Education job. Many did not aspire to one day have this title nor do they realize what all is involved in being an Athletic Director. It does not take long to realize all the extra responsibilities that are added especially if they want to run a highly respectable program. Many years ago I was transferring to open a new school and a young coach was hired to be the next AD. We spent a couple of hours going over what would be his responsibilities for the next year and I gave him a copy of everything that he would need. The next morning all of this material was in my mailbox with a note that said, “No thanks.” He later told me that he had no idea how much was involved with being an AD. That particular school has gone through five athletic directors in seven years. As we all know or will know, this is not an easy job. Listed below are some things that may be of benefit to you as start or as you continue this journey and may help you become a better and more organized AD.

There is no individual or school district sports programs that are identical so what works for one may not work as well for others. The most important thing for every AD to remember is to not “Reinvent the Wheel.” Be willing to ask for help as there are other ADs who are always willing to help and have learned many valuable lessons along the way. There is not a season that goes by that something new does not come up that would be valuable information to all ADs. There are also many valuable resources at your exposure that will be listed that will also make your job easier. If you happen to work in a county that has a county AD then do not hesitate to ask for help from them concerning anything that comes up because they are well informed and usually know the answers or where to find the answers.

Personal Philosophy
The first thing you need to decide is what your personal philosophy will be for being an Athletics Director. There are usually two kinds of ADs when it comes to how you want to run your department. The first is one is willing to do as much of the work him/herself so his/her coaches can spend the majority of their time with their responsibilities of coaching. Most coaches already have a full plate and this allows that coach to put more of his/her efforts into his/her particular sport. The many responsibilities that this AD takes may include scheduling games, transportation, officials, practice times (be sure to treat girls and boys sports equally), parent meetings, concession, coaches education and of course the list goes on and on. Your coaches tend to appreciate AD’s that have this philosophy and many times are more willing to put more effort into their team and players. You also tend to build more loyalty from your coaches and they in turn are more willing to coach longer under these conditions.

The other philosophy is for the AD to make their coaches be required for all the responsibilities that go along with that sport. This approach often leads to burn out and frustration for that coach and many times will not coach long for you because of this reason. No middle school coach makes a great deal of money (I know that comes as a shock to you) for coaching and often realizes that it is just not worth the time and effort to do all the extras that come with coaching. A true coach loses much of his/her zeal when asked to do these things which in turn hurt not only your program but more importantly hurts your student-athlete. Many times the AD that chooses this style is simply not willing to do what is required and passes on the responsibilities to his/her coaches.

Both of these philosophies are used and work. The first tends to build more loyalty and years of service for you and your school. The most important thing for you to remember is whichever you choose, ultimately you will be the one who is held responsible if there is a problem. If no officials show for a game, the fans and administration will come to you and ask why. The liability factor alone would lead to the importance of you making sure all things are done properly.

Athletic Philosophy
This may seem to be a peculiar question to ask an AD, but it is of utmost importance for the total success of their athletic program: do you challenge your coaches to maintain good character and to be a role model? Do your coaches actively teach character to their student/athletes or are they just concerned about winning? Are fundamentals being taught to each student/athlete so they can excel in that sport and will ultimately be successful at the next level? These are just a few of the questions that each AD needs to ask her/himself if she/he indeed wants to build a program that will totally benefit the student-athletes. Yes, you notice that the term student-athlete was used here as all your athletic programs should be an extension of the school and the school’s philosophy. Building a program based on character and the teaching of fundamentals does not just happen, it takes a great deal of work on your part. Character starts with the AD. Statistically, most young coaches today are more concerned with winning than teaching character and fundamentals. THIS IS MIDDLE SCHOOL! Your job does not depend on your wins and losses so you must teach and emphasize this to all your coaches.

Where do I go for help?
As mentioned earlier, don’t re-invent the wheel and be willing to seek help from others. This job is difficult enough and is time consuming so don’t make it harder on yourself. If you are again fortunate to be in a county that has a county AD, don’t hesitate to ask for help from them. Be willing to ask for help from other ADs that have been doing this a long time and who run a good program. I don’t know of an AD who is not willing to help another AD and who willing to share ideas that have worked for him/her. Many county and individual ADs have coach’s manuals that have all the responsibilities of coaches and would be more than willing to share that with you.

The Georgia Athletic Director’s Association is actively putting more emphasis on getting help and resources for middle school ADs. The following link will allow you to look over what GADA has to offer (http://www.gadaonline.net/). At the state conference this year there will be classes offered to middle school ADs that will be very beneficial to you. Another place to get a tremendous amount of help is through the National Interscholastic Athletic Administrators Association (http://www.niaaa.org/). They offer classes that are a must for any athletic director and offer a certification program. It is highly recommended that every AD join these associations if for no other reason, you will receive $2,000,000 liability insurance.

Good luck with your journey and rest assured that what you do helps set the standards for not only your athletic department by for your entire school. Your job is one of the most important jobs in the school so work hard to become the best AD that you can possibly be.

GADA ·
@GADACOACHES
We held our fall board of directors meeting today in Forsyth. Looking forward to our March conference in Savannah to see all of the great ADs in the State of Georgia! https://t.co/HwbwDYnTRQ
View on Twitter 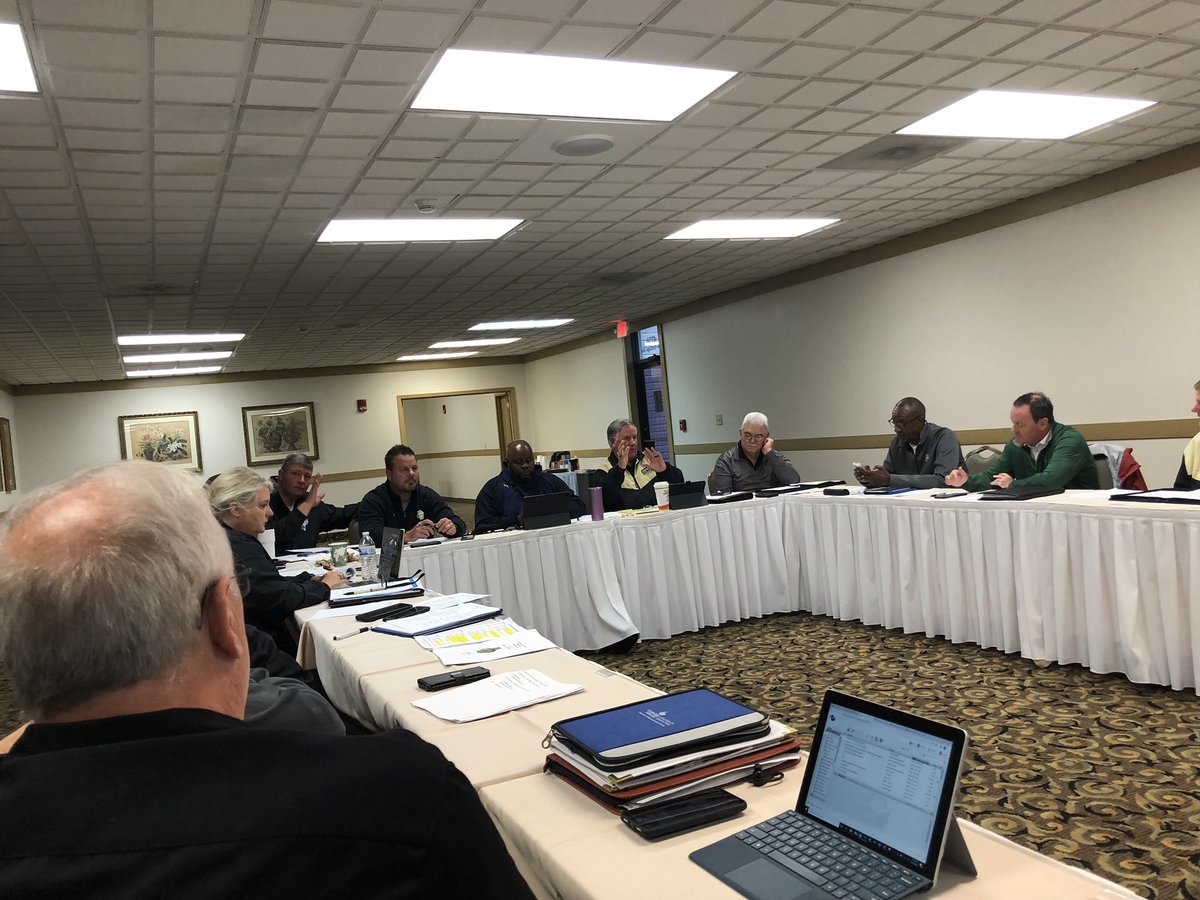 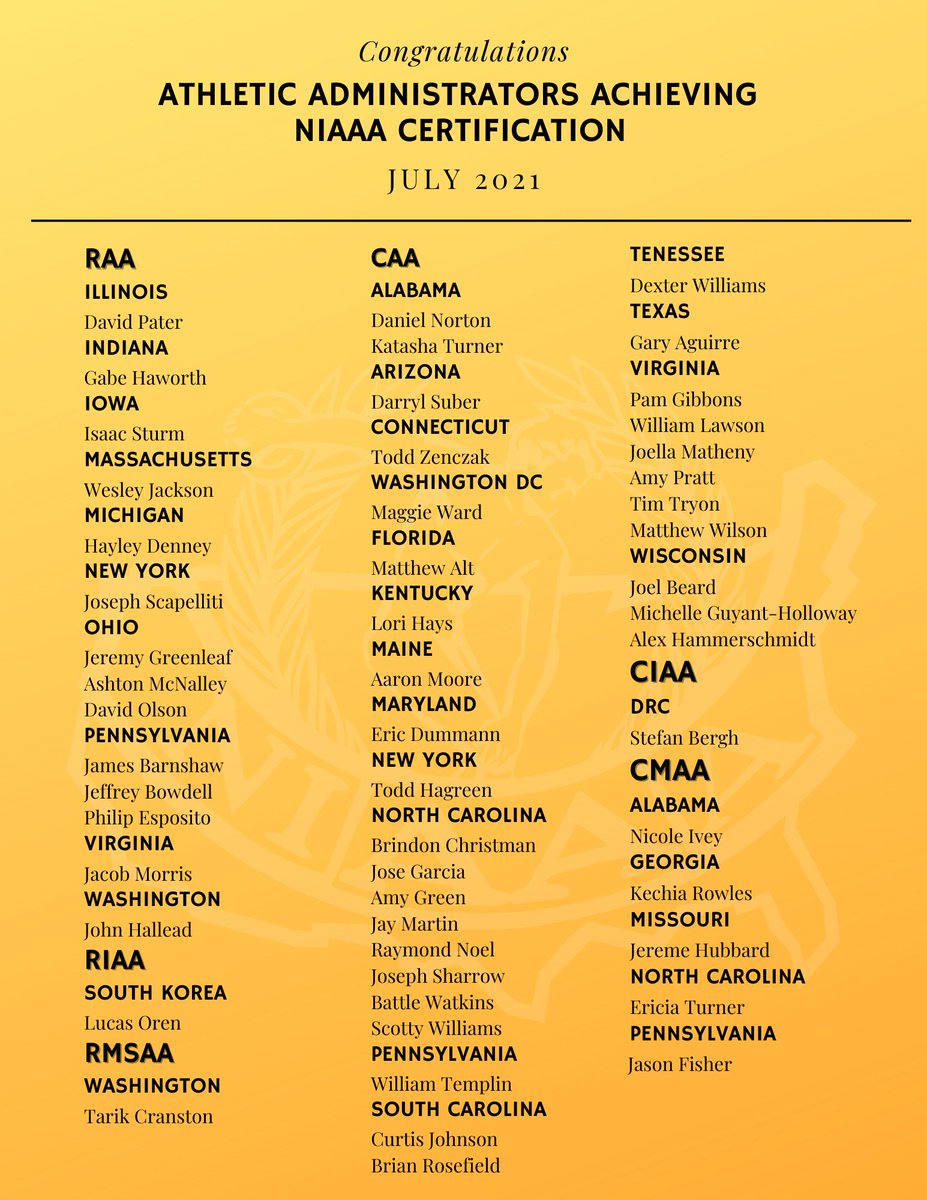 NIAAA@NIAAA9100
Give a round of applause to those who earned NIAAA certifications in the month of July!! 👏 👏 https://t.co/2dsGcb1oo1
1
9 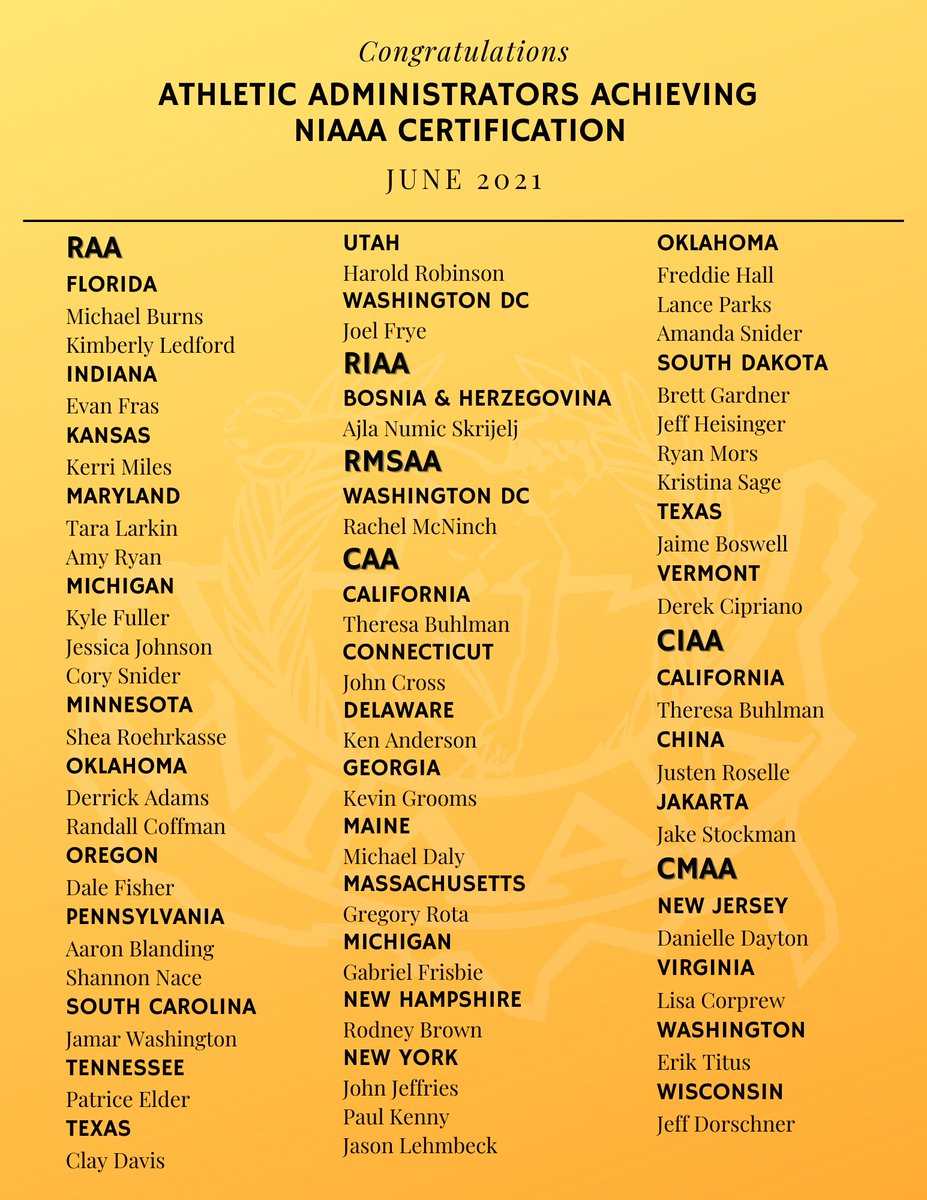 NIAAA@NIAAA9100
👏 Let's give a round of applause to those who earned NIAAA certifications in June! Congratulations on your accomplishments! #NIAAA #ShowingTheWay #NIAAACertifcation https://t.co/DznyVDruCk
0
9

GADA ·
@GADACOACHES
Congratulations to Coach Charlie Jordan, CMAA on being inducted into the GADA Hall of Fame! https://t.co/rvcCst1wDv
View on Twitter 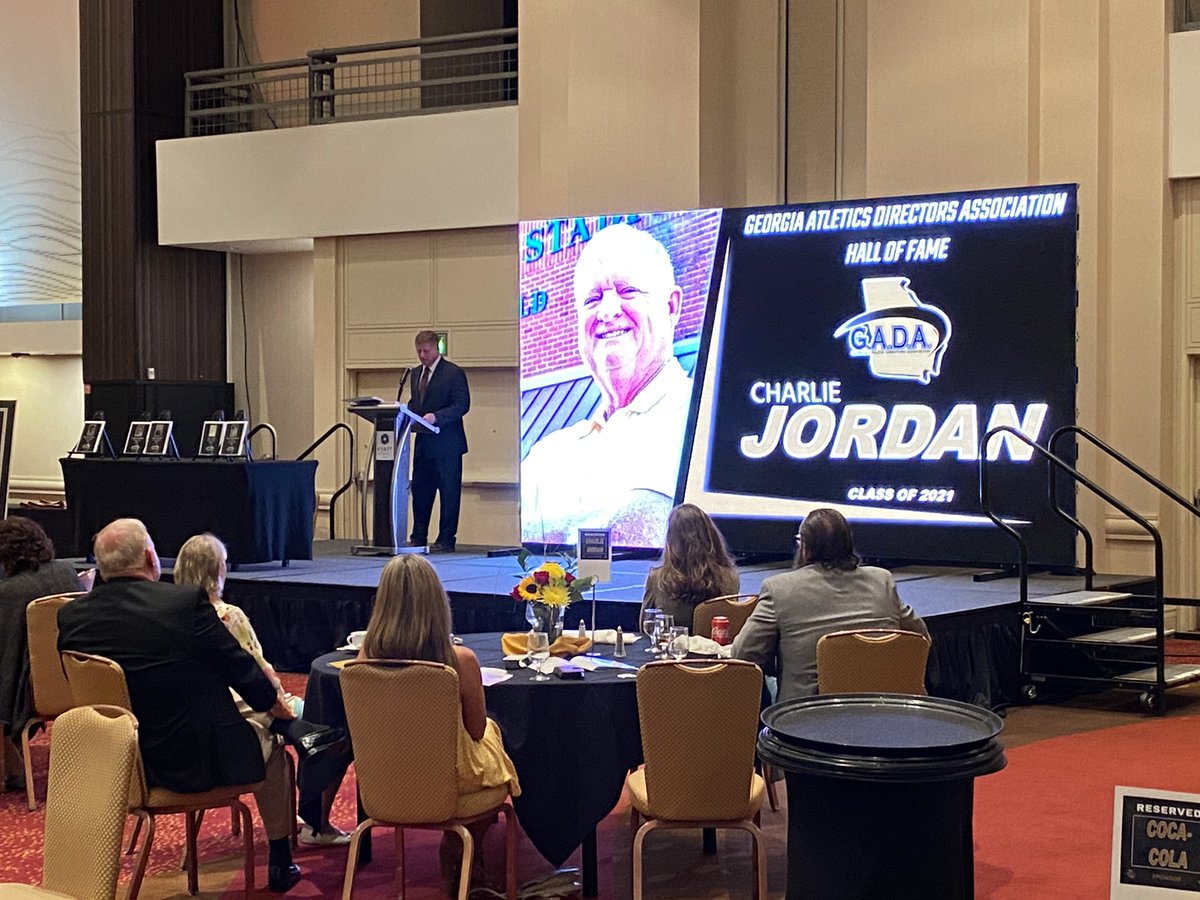 GADA ·
@GADACOACHES
Congratulations to Coach Wallace Davis on being inducted into the GADA Hall of Fame! https://t.co/1Sp1P6trkO
View on Twitter 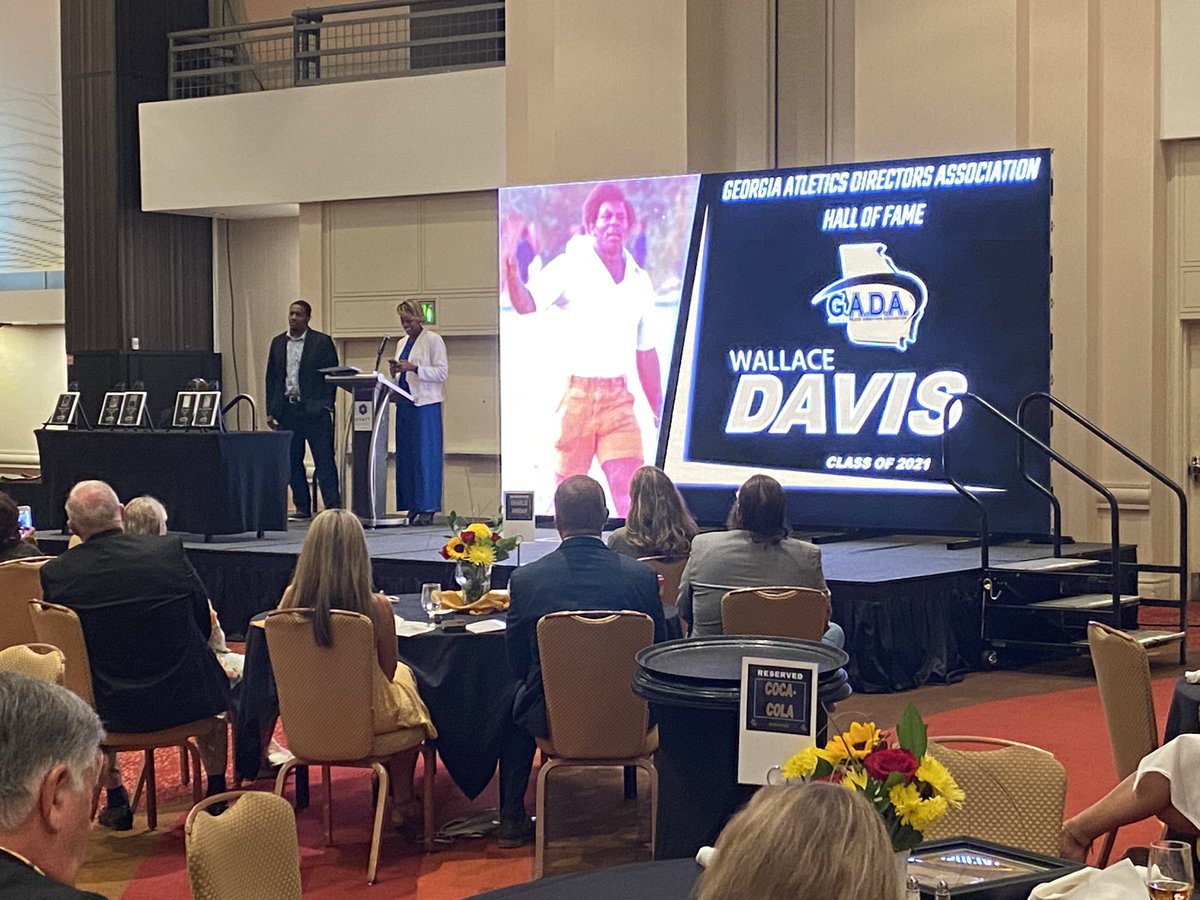 GADA ·
@GADACOACHES
Congratulations Coach Phil Jones and family on being inducted into the GADA Hall of Fame! (Posthumously) https://t.co/OMZyf3GeTX
View on Twitter 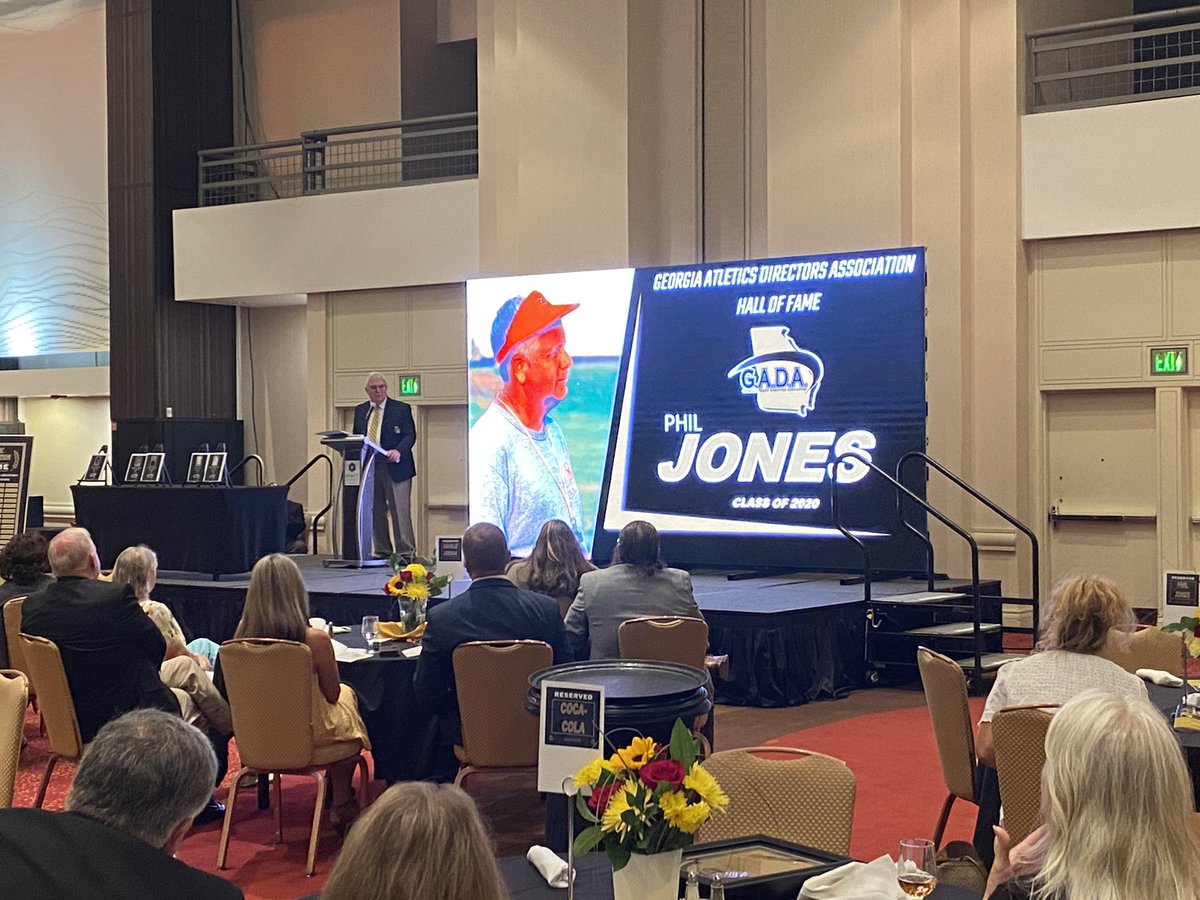