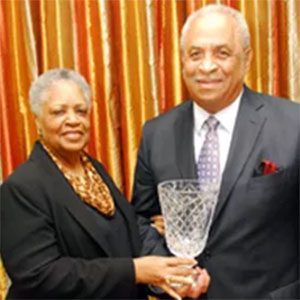 Walter Wade distinguished himself as an educator, coach, and athletic administrator throughout his impressive career.

As a Social Studies and Physical Education teacher at Lynwood Park High School in North Dekalb County, Wade became the head coach for their football, basketball, and track and field teams during the 1960-1961 school year. After his tenure at Lynwood Park, Walter continued his coaching career at Hamilton High School as the head basketball and assistant football coach from 1961-1968.

Recognizing his outstanding leadership ability, Walter Wade was promoted to the position of Athletic Director for the Atlanta Public School district in 1977. While serving in this capacity, Walter was elected as the Vice President of the Georgia High School Association and President of the Atlanta Athletic Coaches Association. During his tenure as Athletic Director, Walter Wade was a strong advocate for gender equity throughout the Atlanta Public School system.

He also served as a member of the GHSA Executive Committee, the Metro Atlanta Athletic Directors Organization, the 100% Wrong Club, the Atlanta Sports Council, the Braves Four Hundred Club, and the American Alliance of Health, Physical Education, and Recreation.

In addition to the many awards that Walter Wade has received as the Athletic Director for the Atlanta Public School district, he will also be credited with being one of the driving forces in bringing the state high school basketball playoffs to the Alexander Memorial Coliseum at Georgia Tech. His years of outstanding direction and common-sense solutions to everyday problems are the hallmark of an excellent career in athletic administration.