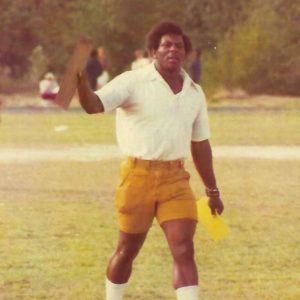 Known by many as a “Living Legend”, Coach Wallace Davis began his career as an Athletic Director simultaneously as he took the helm of Head Football Coach of Carver High School in Columbus, GA in 1976. Although it was the norm during these times for the Head Football Coach (and in some cases, Head Basketball or Baseball Coach) to serve in this all-important leadership role to carry out the administrative duties of the entire athletic department of a high school, Coach Davis’ journey as a coach
and Athletic Director during this time was anything but “normal”.

Coming off the heels of the Jim Crow era in which the segregated south was transitioning into integrated schools, Coach Davis was often called upon to help bridge the gap and set the example for race relations through his coaching and leadership. Upon receiving his B.S. in Physical Education from Lincoln University (Jefferson City, MO), in 1967, he began his coaching career at Carver High School, where he was an assistant football and head track and field coach from 1967-1971. However, he served as a bridge builder during the transition from segregated schools as a head track and field coach and assistant football coach at Hardaway High School from 1971-1976. He was appointed by Sam Burke (Executive Director of the GHSA) to serve on a committee to assist with integration of Track and Field in the state of Georgia; and his dynamic personality helped him gain the respect of both black and white students, teachers, and community members at a time when racial tensions were high. Wallace Davis earned a Master of Education degree from Georgia State University and became the Head Football/Track and Field Coach and Athletic Director at Carver High school from 1976 until his retirement in 2005. During that time, he held memberships at both the GADA (29 years) and the GACA Membership (39 years).

Prior to becoming a coach and athletic director, Coach Davis broke many barriers and records as a highly successful high school, college, and professional athlete. His exceptional athletic talents helped him sign free agent contracts with the Minnesota Vikings in 1966 and the Atlanta Falcons in 1966-67 during an era in which many African Americans were not often considered for professional football opportunities. In 1966, he ran the fastest time for a rookie in the 50-yard dash (in full pads) at 5.9 seconds.

Some of Coach Davis’ honors and awards include him being chosen by Brentson Buckner as Coach of the Year, 2-Time Super Bowl Player for the NFL as one of the “Top 100 High School Coaches in America;” chosen “Man of The Year” by The Men’s Progressive Club of Columbus, Georgia in 1987 and 1988; voted coach of the year more than ten times by various organizations; Athletic Director of the Year by Georgia Athletic Directors Association 2001; GADA Athletic Director of the Year for Region 4-AAAA; and he was awarded the Knox Culpepper Sportsmanship Award. Coach Davis was a member of the National Interscholastic Athletic Administrators Association from 1971-1976. As a coach, he was won the region championship in football four times, as well as an incredible twenty-sex region championships in boys and girls track. In 2001, Wallace received the GACA Coaching Milestone Award for Outstanding Success as High School Coach in Georgia. For his years of service as a coach in football, wrestling, basketball, boys & girls track & field, he received the GACA Distinguished Coaching Service Award in 2005. Wallace Davis was also instrumental in coaching over 400 athletes that received college scholarships. Out of those athletes, 15 played in the NFL including eight Super Bowls appearances, and four have become coaches or consultants for the NFL. Many others have become lawyers, high school coaches, teachers, engineers, entrepreneurs, and veterans of the armed forces. In 1987, the Carver High School football team was ranked nationally by USA Today. He coached two AJC Super 11 Players, and twenty-two All-State players in football

During his time as Athletic Director, the Carver High School Girls and Boys Basketball teams reached the State Final Four Tournament. Throughout his career as a head football coach, Wallace Davis amassed over 150 wins, including four region championships. In track and field, he coached his team to more than twenty region championships.

Wallace Davis has continued to offer his time and talents to others and has been recognized for his work as a community leader for his contributions by both local and national organizations. He was nominated by community members to serve as an official torchbearer for the 1996 Olympic Games’ Torch Bearer Relay. In 2005, he was inducted into the Chattahoochee Valley Sports Hall of Fame and in 2013, he was inducted to Lincoln University’s Athletic Hall of Fame. Wallace Davis was recognized by the Sam Mitchell Basketball Camps as a Legend and by Spencer High School as a Golden Owl Awardee for outstanding service. In 2018, he and his wife Ann, were recognized by the Chattahoochee Valley community for longtime service to the community.

Now in his 16th year of retirement, Coach Davis enjoys spending time with his wife of 50 years, Ann. He has a green thumb inherited from his late father Johnny and grows delicious vegetables in his garden.

When he is not cultivating fresh fruits and vegetables, he can be found connecting with his close friends and pouring into the lives of his children and grandchildren. His son, Ryan, is a longtime teacher and football/track and field coach in the Atlanta area and is married to Inda, a wedding planner, who is the mother of their son Zyan (2) and daughter (arriving August 2021). Alida Abdullah , his daughter, is a K-12 educator who is married to Shakeer Abdullah, a Higher Education Administrator. Together they have four children: Josiah (15), Ameena (11), Surayyah (10), and Jibril (6). Coach Davis coached both Alida and Ryan during their high school years in track and field and football. In 2019, he and Alida teamed up to pen his memoir entitled “One Moment in Time”, available on Amazon.com.