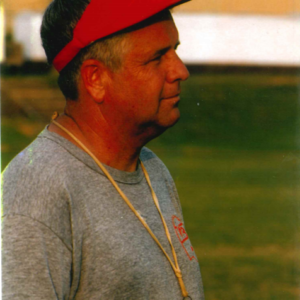 Those who know Phil Jones as a person and as an active coach and athletic director know that he was committed to building relationships with the students in the schools and communities where he served. A football coach by profession, Phil believed that all sports were important and worked to create a balance between male and female programs. Phil was known for his work ethic and fairness. Parents loved him for the way he handled the student-athletes. Phil attended as many activities on campus as possible to show his support for all the students. With Phil, it was not about wins and losses on a scoreboard; it was about helping young people grow into successful adults.

Phil grew up in Thomaston, Georgia, where he attended Robert E. Lee High School and played football, basketball, and baseball. Phil went on to earn a bachelor’s degree in Social Studies from Mercer University, where he was a member of the baseball team. During his senior year at Mercer, he was named Captain of the team as well as the most valuable player. He began working on a Master’s Degree from Georgia Southwestern University but ultimately moved on to the University of Georgia where he completed his degree while serving as a Graduate Assistant Coach.

Phil began his forty-seven-year coaching career with a one-year stint at Northside High School in Warner Robins, Georgia, before moving to Jenkins High School in Savannah, Georgia where he served as the Head Baseball Coach and Assistant Football Coach for three years. Phil then accepted his first Head Football Coaching position at Jeff Davis High School in Hazlehurst, Georgia where he also had his first stint as an Athletic Director. After four years, Phil was on the move again, this time accepting the position of Head Football Coach and Athletic Director at Fitzgerald High School in Fitzgerald, Georgia. After five years in Fitzgerald, Phil moved to Dooley County High School in Vienna, Georgia where he coached for four years before moving to Winder-Barrow High School in Winder, Georgia. At WBHS, he spent thirteen years as Head Football Coach and Athletic Director. From Winder-Barrow, Phil made the jump to the collegiate level when he accepted a position with The University of Georgia. At UGA, he coached receivers, defensive ends, and served as the special teams’ coordinator during a four-year stint. From there, Phil moved to Southern Methodist University in Dallas, Texas where he served one year as tight ends and special teams’ coach. After his one year at SMU, Phil accepted a position at Gardner-Webb University in Boiling Springs, North Carolina where he coached receivers and special teams. After three years in Boiling Springs, Phil was tapped to be the Head Football Coach and start a program from scratch at Shorter University in Rome, Georgia. His eleven years at Shorter University capped a storied and very accomplished forty-seven-year career in coaching and athletic administration.

Phil was very involved with the Georgia Athletic Directors Association and the Georgia High School Association. He was voted the state athletic director of the year in 1993, and he served on the state executive committee from 1982-1984, 1990-1993, and 1995-1997. Phil was named Middle Georgia Coach of the Year by the Macon Telegraph after his Dooley County Team won the South Georgia Championship in 1983. In 1993, he was named the AAA State Coach of the Year when his Winder-Barrow team reached the Semi-Finals of the football playoffs. In 1994, he was named the Head Coach for the North Team in the GACA All-Star Game. Phil was also a member of the American Football Coaches Association and was named the Grant Teaff National Coach of the Year in 2008.

Phil is married to Jane C. Jones, and they have two children, Philly and Connie. Phil and Janie are very active in the Baptist Church.