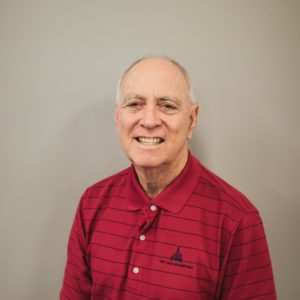 When one thinks of Jerry Cauley, the words commitment, dedication, and passion are just a few words that come to mind. Born in Hot Springs, Virginia, Jerry attended Virginia Tech University, where he graduated in 1974 with a BS degree in Health, Physical Education, and Recreation. Out of college, Jerry taught and coached girls’ basketball in Rocky Mount, Virginia, where his team won the region championship in his first year as the coach. In that same season, Jerry was named the Roanoke Valley Coach of the Year.

In 1981, Jerry moved to Georgia, where he would go on to serve the Forsyth County School System for thirty years. During his tenure in the Forsyth County School System, Jerry served his students through a variety of leadership capacities. His first love was coaching athletics at the high school level. As a high school coach, Jerry coached softball for sixteen years and girls’ basketball for nine years. While a softball coach, Jerry’s team won the state championship in 1996. His servant leadership did not end on the playing surface, as Jerry also served as the Athletic Director for ten years.

As Athletic Director, Jerry helped begin multiple sporting programs at Forsyth Central High School. Those sports included volleyball, gymnastics, swimming and diving, competitive cheerleading, and lacrosse. As an active member of his region, he served as the Region President and was on the strategic planning committee that designed the athletic facilities for two new high schools being built in Forsyth County. Also, during his time as Athletic Director, Jerry was named Region Athletic Director of the year four times, and Forsyth Central won the State Sportsmanship Award three different times. He wrote a curriculum entitled “Sportsmanship is Contagious” to be used by coaches at Forsyth Central, and this model was on display at the Sportsmanship Summit in Macon.

Not only was his impact felt at Forsyth Central High School, but Jerry attended every Georgia Athletic Director’s Association state conference during his tenure as athletic director. To increase his growth and development as an athletic director, Jerry also attended National Conferences in New Orleans and Orlando. He earned his CAA in two years and then worked toward his CMAA status. In pursuit of his CMAA, he created and led a student-athlete driven organization known as the Bulldog Leadership Team. The goal of this student-led group was to determine rules and regulations, lettering policies, and sportsmanship guidelines for all sports and activities.

Jerry has been retired for almost seven years and enjoys serving as a part-time driver education instructor and spending time with wife Janet, son Chris, and daughter-in-law Sandra, and especially his three-year-old grandson, Jaden.