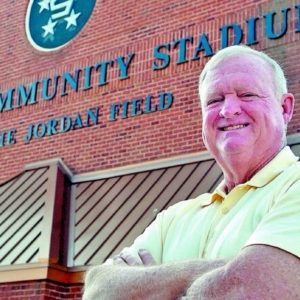 The golf course may be the most common place to find Charlie Jordan today as he enjoys his retirement from education-based athletics, but for over 35 years, Coach Charlie Jordan would have been found walking the halls, supervising athletic events, coaching football, or serving alongside his student-athletes in the communities in which he belonged. Charlie Jordan was a leader who built his career around relationships-relationships that were not only with his players, but with all students and athletes. He had the ability to make everyone involved feel as though they had a role to play as a contributing member to his successful programs. Coach Jordan is first and foremost a people person. He is a great man of character, who was able to get people to see and believe in what the challenge is and come together to see that the job gets done no matter the odds or the fact that the challenge would prompt lesser men to shy away from seemingly tackling the impossible.

Charlie Jordan attended high school in Savannah, Georgia at Jenkins High School. One of the most influential men in his life was his high school football coach Lamar Leachmen, who Charlie says he had a ‘hate-love’ relationship with because he hated him while he played for him, but loved him once he was able to apply the lessons Coach Leachmen taught him later in life. After high school, he played for John Robert Bell at East Tennessee State University. Combining the tenacity of Coach Leachmen and the love of Coach Bell, Charlie was persuaded to pursue a career in teaching and coaching.

An exceptional career begun in 1970 as Charlie spent two seasons coaching at ETSU (1970-1972) and eventually coached a season at the University of South Carolina in 1973-1974. But, Coach Jordan said the requirements of coaching in college was not for him; he was called to high school coaching in Georgia. Between college stints, Charlie served a year in his hometown at Savannah High School. After leaving USC, Charlie settled in to what would become a thirty-four year venture serving high school communities throughout Georgia. Charlie made his most impact at Shiloh High School serving as athletic director and head football coach from 1985-1999, but before arriving at Shiloh, he has made stops at Tucker, Shamrock, Monroe Area, Johnson-Gainesville, and South Gwinnett, all located in the northeast area of Georgia. After his long tenure leading the Shiloh generals, he moved to the Georgia coast to serve as the Director of Athletics for the Glynn County School System from 1999-2004. He then concluded a remarkably storied career as an athletic administrator at Peachtree Ridge, back in Gwinnett County, in 2006. And in 2008, Charlie was inducted into the Greater Savannah Athletic Hall of Fame.

Winning was the goal, but close observers say that Charlie never won at the expense of the young people, his integrity, or his moral values. He worked his players hard but pushed himself even harder. Charlie was a big proponent of putting in your dues, working hard, and reaping the rewards of that work ethic. Those rewards came throughout his career and now, years after he has left the communities that he once served. In 2003, the Shiloh community named the field at the Shiloh Community School, “Charlie Jordan Field.” The following year, he was inducted into the inaugural class of the Shiloh High School Athletic Hall of Fame. That same year, 2004, Charlie was selected by the National Council of Secondary Schools as the Georgia AD of the Year. And in 2000, Charlie was selected by the Gwinnett Daily Post as one of the top five sportsmen for the 1990s decade. When it comes to his coaching, he was named Coach of the Year by the Atlanta Area Football officials in 1991; Coach of the Year by the Gatorade Coaches Care Program in 1995; Gwinnett County Coach of the Year in ’91 & ’95; and he took a Shiloh program that had won ten games in their first five seasons to three playoff appearances, 62 wins in his sixteen seasons, and the third best winning percentage in Gwinnett County in the 1990s.

Charlie Jordan was also instrumental in the development of the Georgia Athletic Directors Association. As a young AD, he, and a group of Gwinnett County ADs, attended the GADA conference in Statesboro, where he became contributing leader for many years. In 1997, Charlie earned his Certified Athletic Administrator certification through the NIAAA. He was selected as region Athletic Director of the Year in 1996 & 1998 as well as GADA AD of the Year in 2003.Charlie was a 15-year member of the GADA Board of Directors serving as site chairman for the state conference and playing an instrumental role as the chairman of the golf tournament at the conference. In 2003, Charlie used his Character Counts program that he started in Glynn County, where coaches received local media recognition for coaching character, to achieve the Certified Master Athletic Administrator certification. His program would be applied to districts throughout the nation as character coaching became a hot topic in the 1990s and early 2000s. During his years as an athletic administrator, Charlie attended numerous national conferences.

Not only did Charlie Jordan demonstrate excellence as a coach and athletic administrator, his commitment to greatness followed him to his classroom and to his personal life. One of the greatest accomplishments an educator can receive is to be named the school’s teacher of the year. In 1998, Charlie received this recognition, being named Shiloh High School Teacher of the Year. Charlie is married to his wife of over 46 year, Chris, and they have two adults children, son, Lewis, and daughter, Lucy Parks. Lucy and her husband, Ben, have Charlie’s four grandchildren: Thad, Eli, CJ, and Annie.

Anyone who has spent time with Charlie as a player, colleague, coach, wife, child, or grandchild would agree that Coach Charlie Jordan is a ‘good man.’