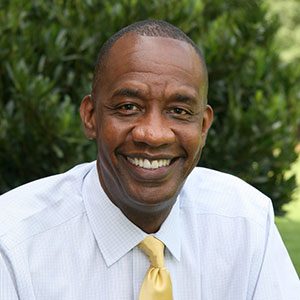 It would be most difficult to find an individual who has served as coach and athletic administrator in the state of Georgia who is more respected and admired than Carter Wilson. His commitment to the idea that athletic endeavors build character has certainly been evident not only in his own life but also in the lives of those fortunate to find themselves within his sphere of influence. Those who know him best realize that when they are in the presence of Carter Wilson, they are rubbing shoulders with an individual who is uniquely gifted with great wisdom, a heart for young people, a commitment to excellence and a personality that draws others to him.

Carter received his Bachelor of Arts in Accounting at Clark College, in Atlanta (1976) and his Master of Science: Sports Administration from Georgia State University (1993). His versatility as an educator and coach can clearly be seen as he proved to be successful on the collegiate as well as the high school level. Carter assisted in the development of a successful Division I basketball program at Georgia State University (1985-1993). He was named Head Basketball Coach at Georgia State University in March, 1993 and led the Panthers through June of ’97. The school leaders of Tucker High School called on Carter in July, 1997 to become a teacher and coach in the DeKalb County School System. He accepted the position and was instrumental in modifying the general education curriculum for special-needs students based upon a variety of instructional techniques and technologies. He fostered meaningful relationships among students through student field trip retreats and team-building community service projects while providing key support for special needs students in their classes.

One could argue however that Carter’s greatest work occurred while he served as Athletics Director and instructor at the City Schools of Decatur from 1999 until his retirement in 2017. Decatur City Schools is a highly regarded public school system that serves 5,000 K-12 students. Carter was responsible for the athletics department budget, staffing, and compliance with school system policies and procedures as well as the rules and by-laws of the Georgia High School Association. While serving as an instructor at Decatur City Schools, a highly diverse environment, he earned strong results with outstanding social skills, positive reinforcement and by effectively managing classroom time and varying lesson plans.

Coach Wilson accumulated many accolades and accomplishments as a direct result of his ability to coach his players on the ‘hardwood’. He was named Region Basketball Coach of the Year on three occasions (1985, 1999, & 2003) and DeKalb County Coach of the year in 1985. He has always understood the importance of sharing his wealth of knowledge and experience as a coach and athletic administrator so he began to invest his time and energy in state and national organizations. On three different occasions (1997, 2001, & 2003) he shared his insights as a presenter with other coaches at the Georgia Athletic Coaches Association’s (GACA) annual clinic. Carter has been a member of the National Interscholastic Athletic Administrators Association (NIAAA), the Georgia Athletic Directors Association (GADA) while also serving as an Executive Committee Member of the Georgia High School Association (GHSA), and the Georgia Sports Hall of Fame Selection Committee. While a member of the NIAAA, Carter was selected to serve as a NIAAA Delegate (2010-2012), a member of the NIAAA’s Blue Ribbon Panel (2010), and made presentations at the National Convention and National Conference (2011). In light of his contributions to these state and national organizations he has been honored by receiving the NIAAA’s State Award of Merit (2008), the GADA’s Frank Kovaleski Professional Development Award (2009), the GADA’s Region Athletic Director of the Year award (2004 & 2009), the National Federation of High Schools’ Citation Award (2012) and the GADA’s Distinguished Service Award on three occasions (2007, 2010, & 2013). Carter has never shied away from hard work and is a firm believer in being a leader who truly serves others. He has served faithfully as a GADA Board Member taking on the responsibilities of being GADA President (2009-2010), GADA’s Hall of Fame Chairperson (2010-2017), GADA’s Leadership Training Coordinator (2006-2008), CAA Test Administrator and also a Strategic Plan Committee Member for the GADA in 2012.

It would be wise for anyone desiring the position of Director of Athletics to draw his or her inspiration from Coach Carter Wilson. He did it “the right way.” We thank him for his wisdom, humility, service and kindness and congratulate him on being named to the GADA’s Hall of Fame Class of 2018. The honor is certainly well deserved.