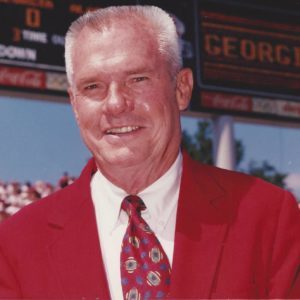 The words leadership, determination, and service epitomize the person that Coach Billy Henderson was throughout his career in education. Not only was Coach Henderson a storied high school football coach and Athletic Director, but he also was a proud husband and father to his family. Throughout his educational career, Henderson served in many compacities but always aimed to be a positive steward for his community.

Coach Henderson was born in Dublin, Georgia and raised in Macon, Georgia. During his high school athletic career at Lanier High School, Henderson was twice named All-American player for both football and baseball. In his four years of high school, Henderson earned fourteen letters in football, basketball, baseball, and track. He was drafted by the Chicago Cubs after his senior year of high school, but he chose to sign a football scholarship with the University of Georgia. There he was an All-SEC performer and earned eight letters in baseball and football. To this day, Coach Henderson still holds the career stolen bases and four-year batting average records for UGA Baseball.